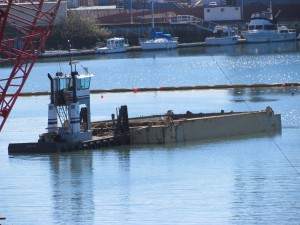 Rather than watching your kids play with toy cranes and backhoes, digging and slinging mud around, why not take them over to Alameda Point to see the real thing.  Big machines are picking up giant scoops of mud from Seaplane Lagoon and moving it over onto the land.  Adults will enjoy the action too and get a better understanding of the cleanup activity that has been going on at the Point for over a decade.

The Navy has been working 24/7 at Seaplane Lagoon to complete its removal of mud from areas where sewer drains once dumped toxic chemicals like PCBs, cadmium, lead, pesticides, and radium.  This is the biggest digging operation at Alameda Point since the replacement of the nearby sewer lines.  The Navy is trying to finish its cleanup before the Least Terns, an endangered species, return to nest at the nearby Wildlife Refuge at Alameda Point.  The terns feed in the lagoon, and the cleanup commotion might drive them away.

When the dredging barge with its backhoe scooper is too far from the landing, it places the mud in a floating box.  When the box is full, it gets towed over to where the big crane is.  The crane then grabs the mud, swings over, and drops it in the drying area.  There, front-end loaders drive around, raking the muck to help the water drain off.  Later in the year when the mud is dry enough, it will be loaded onto dump trucks and hauled away.  The water that drains off the mud is pumped into nearby red trailers, where it is eventually treated to remove toxic chemicals and then released back into the lagoon.

Radiological danger signs are posted on the fence because small amounts of radioactive radium-226 (used to paint aircraft dials so they would glow in the dark) once drained into the lagoon.  Warning signs must go up anywhere radioactive material is present, even if the risk to the public is low.  The amounts of radium in the lagoon do not pose a threat to anyone watching from the sidelines, and metering devices worn by workers cleaning the site have shown levels 1,000 times lower than those considered hazardous.

For a sneak preview of your trip to the mud, check out the YouTube video “March Mudness 2011 – Dredging Seaplane Lagoon.”  You’ll be over there in no time.