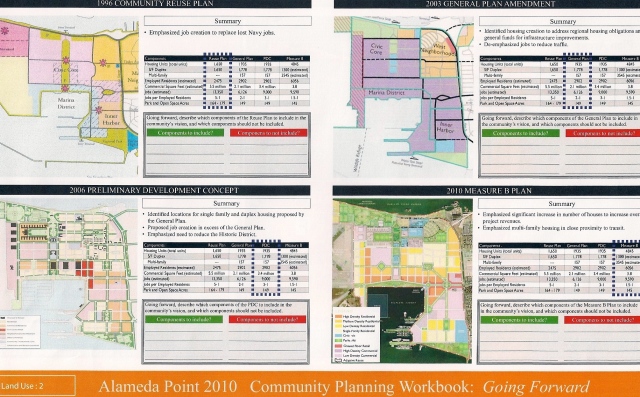 It’s not a blank slate, but there’s room for you to write.

Have you seen the Alameda Point planning workbook the city produced to solicit community input? It’s a remarkably comprehensive review of the myriad issues—and choices—that confront us.

With the rejection of Measure B and the departure of master developer SunCal, the city is working to determine how best to proceed. They’ve produced a “workbook” called “Alameda Point 2010 Going Forward,” and they’re using it and a series of community workshops to gather information about what we would like to see out at the Point. We’ve been asked to do our homework.

Everything is on the table, but the city is not starting from scratch. The workbook reminds us what was proposed in the 1996 Community Reuse Plan, the 2003 General Plan Amendment, the 2006 Preliminary Development Concept, and the 2010 Measure B Plan. We are then asked which components of these plans should be included and which should not be included going forward. We are asked to consider that the Point has public trust lands, a wildlife refuge, hazardous materials, and an Historic District. Future development will call for balance and trade-offs.

I attended the November 9 workshop at the Grand Pavilion and sat at the “Parks and Open Space” table. We were asked to rank our specific preferences for various features at the Point. The huge 60-acre sports complex parcel, for example, could include anything from a new gymnasium and swimming pool to an open meadow with park benches. The Seaplane Lagoon waterfront could be active space for people and events, or restaurants and entertainment? Across the room at the “Building Types and Neighborhood Character” table, people were looking at examples of various types of mixed-use neighborhoods and at different types of buildings. They were asked what they liked, where they thought a particular type of building belonged, and whether it was “Right” or “Wrong” for the Point.

If you’d like to influence the direction for Alameda Point, or just learn about what’s out there, it’s well worth your time to attend the city’s last workshop on December 8 from 6:30-8:30 p.m. at The O’Club, 641 West Red Line Drive, Alameda Point. You can also participate online. Beginning Thanksgiving Day, through January, an interactive version of the workbook will be available at http://www.alamedapoint-goingforward.com. The workbook will also be accessible via the city’s homepage or available at city hall.

Do your homework. Both you and the city will learn something.