Ranked Choice Voting gathered steam in the 2022 election.  From statewide to county and city races, the voting method of ranking candidates by preference was adopted by voters in eight more places.  Plus hundreds of thousands of voters across America, including the Bay Area, are already using it.  In Alameda, ranked choice voting was a topic of discussion at candidate forums and in written questionnaires.

“RCV is on a clear path to becoming the norm, not the exception,” said Deb Otis from FairVote.org.  “In large parts of the country, voting equals ranking.”

This voting method would upgrade the way Alamedans vote now.  With ranked choice voting, candidates need to receive a majority of the votes cast in order to win.  Now, whoever gets the most votes wins even if it is not a majority.

In November, neither city council winner reached the 33.34 percent majority threshold needed when two seats are being contested.  (That’s the threshold in a two-seat race because it is mathematically impossible for a third candidate to also reach it.)  Tony Daysog got 27.95 percent of the votes, Tracy Jensen got 19.54 percent, and the other candidates split 52.51 percent.

The top two vote-getters may well have been the same if ranked choice voting had been used, and this is often the case.  But not always, as we saw in the recent Oakland mayoral race.  The important thing is that the winner is supported by a majority of the voters and thus has a clear mandate to govern.  In our recent city council election we will never know who the majority supported.

Ranked choice voting is simple.  Instead of voting for one candidate for each seat, voters can opt to rank candidates in order of preference.  If no candidate reaches the majority threshold, then an instant runoff takes place by using voters’ backup choices.  The candidate in last place is eliminated, and the next choice of those who chose the eliminated candidate is reallocated and tallied.  That process repeats until someone wins a majority. 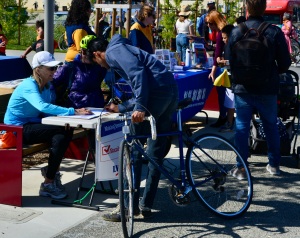 If the Alameda League of Women Voters and its supporters get their way, the option to institute ranked choice voting in Alameda will appear on the ballot in 2024.  The league has been explaining the voting method to any group or organization that asks, as well as through tabling at public events, so that the electorate is informed should it make it to the ballot.

While the wind is at the league’s back, electoral reform is hard.  People are reluctant to change, especially those who win under the current system.  Thus, it is unlikely that the city council will put ranked choice voting on the ballot.  Instead, a citizens’ initiative, which requires collecting signatures to get a measure on the ballot, will be needed.

“I don’t understand what’s the big deal,” said one gentleman visiting a league table.  “Ireland and Australia have been using it for ages, but there it’s called preferential voting.” 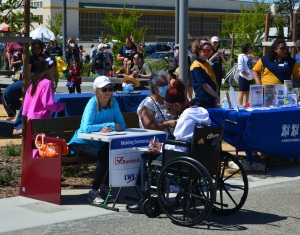 Ranked choice voting has become the fastest-growing electoral reform in the nation because it ensures elected officials have the broadest range of support, and reduces political polarization and negative campaigning.  Candidates are motivated to expand their base of support by asking voters whose first choice is another candidate to consider them as their second choice.  It also encourages more women and racial minorities to run for office.  And it saves the expense and delay of a runoff election when a majority mandate is required.

The results this year in Alaska, for example, reflect how ranked choice voting fosters an independent approach to politics, with wins by Democrat Mary Peltola in the House race, moderate Republican Lisa Murkowski in the Senate race, and conservative Republican Mike Dunleavy in the governor race.  Candidates there ran on their ideas rather than their adherence to political party orthodoxy.  No one was told that their votes would be wasted or split.  No candidate was told they would be a spoiler.  Instead, everyone got to voice their true preference.

Meanwhile, detractors of ranked choice voting may blame the voting method when their candidate doesn’t win, despite the eventual winner being the preference of the majority of voters.

Alamedans will ultimately choose if and when they want to upgrade  their electoral system.  Stay tuned as the local effort for ranked choice voting forges ahead.

Like Loading...
This entry was posted in Elections and tagged 2022 election, Alameda, instant runoff, Ranked Choice Voting. Bookmark the permalink.