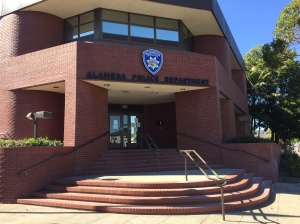 Alameda is joining numerous cities across the country in rethinking how we provide policing before next year’s city budget is prepared.  What level of policing we want and expect from the Alameda Police Department (APD) will determine the funding we provide.

Recently the League of Women Voters and AAUW hosted an online discussion with the APD to inform the public of current police policies and practices, and the challenges and opportunities we face.  Michele Ellson moderated the discussion.

The populist rallying cry to “defund the police” lost some steam by the end of the discussion when it became apparent that the APD has already been defunded.

In 1991 when former Chief Rolleri was hired, Alameda had 111 officers, fully staffed traffic, detective and patrol units, and officers walking business districts and bicycling the neighborhoods.  Today the APD is allotted only 88 sworn officers and is currently operating with 57.  Fifty are on patrol duty.  This under-staffing barely allows for 24/7 car patrol and does not provide any community policing on foot or on bicycles.

Crime levels are down since the 1990s, but officers still respond to about 70,000 service calls a year.  They also perform various activities behind the scene, such as processing evidence, preparing reports, doing enforcement and offering victim support.  All 911 calls go through the APD.

Although about 3,000 arrests were made annually over the past five years, use of force was only used an average of 28 times a year.  Wrist locks are considered a use of force. Rolleri pointed out that the APD bans chokeholds and carotid restraints, and no APD officer has fired a weapon in the past 15 years.

Arrests include felony, misdemeanor, infractions and juvenile arrests.  This means “someone is either taken into physical custody or was in temporary police custody and released with a notice to appear in court at a later date,” explained Interim Chief Emmitt.

About 30 years ago funding was cut from social programs, and services were shifted to local law enforcement.  People now expect police to respond to everything.  The APD welcomes the idea that others handle the initial response to mental health calls, homelessness, and minor code compliance issues.  “I don’t think there is any police officer in America who would balk at the idea of not having to be the initial responder to a mental health crisis situation,” said Emmitt.  “The same thing for our homeless communities.”

Emmitt pointed out, however, that police would still be required as backup to keep people safe and that only police can arrest and detain suspects.  Another challenge is that other professions are currently not on-call 24/7.

Alameda needs more sworn officers, but filling vacancies and retaining officers has been tough over the past five to eight years.  “In recent years, there has been a gradual lessening of interest in the field because of negative portrayals of policing,” Rolleri said.  “A lot goes into screening.  We’d much rather have the vacancies than make a bad hire.”  Emmitt added, “How officers represent themselves is the best recruiting tool.”  While the makeup of the department is ethnically diverse, at least five African-American sworn officers need to be hired to match the demographics of the city.

Current training is wide-ranging, ongoing and mandated.  It includes instruction on de-escalation, use of force, crisis intervention and implicit-bias training.  Budget constraints dictate how much discretionary training is given.  Emmitt emphasized that the skill of communicating effectively is fundamental to all policing.

The panel emphasized that state and federal laws govern their policies and practices.  The APD also employs an outside company to keep its policies current and to reduce liability for the city and its officers.  Personnel issues, with some exceptions, cannot be disclosed per the California government code.  And contrary to rumors, most disciplinary actions are set by statute, not by the police union.  Links to the government code, labor contracts, policy manuals, and statistics are posted on the APD webpage.

The community event was dubbed “Nuts & Bolts: Policing in Alameda” and is available on YouTube and at the League of Women Voters’ website.

Like Loading...
This entry was posted in City Hall, Education, Quality of Life and tagged Alameda, budget, League of Women Voters, police, reforms. Bookmark the permalink.