Take a Hike (and a Survey)

As the East Bay Regional Park District celebrates its 85th anniversary and makes plans for the future, they want to know what features and activities locals would like to see added, and what you think can be improved.  All are encouraged to participate in a survey that also teaches about some of the issues the district is facing throughout its 73 parks in Alameda and Contra Costa Counties.

What park issues are important to you?  Keeping mountain bikes off narrow hiking trails?  Planting more trees?  Restoring natural habitat?  Having more camping opportunities?  Whatever it is, now is an opportunity to be heard.

East Bay Regional Park District is primarily financed through property tax.  We get a lot for our money.  Within the City of Alameda, the park district manages Crown Beach, parts of the Bay Trail, and Breakwater Beach.  Most exciting is that negotiations are being finalized to develop a brand new park along the estuary at Alameda Point.

At the Crab Cove Visitor Center on Crown Beach, the park district recently converted part of the building that was previously used as workshop space and renovated it to house two lab spaces for public use and staff office spaces.  The public restrooms there have been made ADA compliant.  With the passage of Measure FF, the center is now open seven days a week.

A design for park expansion across the street from the Crab Cove Visitor Center is currently being drafted and public input meetings will follow.  In the meantime, the park district has begun replacing an old sewer pipe at the end of McKay Avenue next to the visitor center.  Upgrades to underground infrastructure and lighting on the street come next.

At Alameda Point’s Breakwater Beach, the park district will be restoring the sand dune as natural habitat and upgrading the shoreline next to the Bay Trail with more convenient non-motorized watercraft access next year.

I’d like to see more trees planted at Crab Cove.  Some are dead, others were removed and never replaced.  Trees are important for the overall experience and for maintaining a healthy planet.

Beyond the Island City, there are some 800 miles 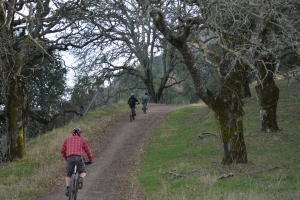 The park district’s board of directors will be touring Crab Cove and Breakwater Beach on Friday, July 26, from 10:00 to 1:00 and the public is welcome to attend.  Register by email to boardsitetours@ebparks.org or call 510-544-2510 by July 18.

The district’s 24-question survey, available in four different languages, must be completed by Wednesday, July 31, and can be found at EastBayParkSurvey.com or when you visit the Crab Cove Visitor Center.