The businesses on the west end of the island will finally get the boost they’ve been waiting for, especially Webster Street.  Around 1,900 new homes are in various stages of planning and construction there.  800 new homes are slated for construction at Alameda Point with 400 in the planning stage, 300 at Alameda Landing, and the Del Monte Warehouse project will bring another 400.  The West Alameda Business Association (WABA) must be jumping for joy.

It reminds me of the time when South Shore Shopping Center was renamed Alameda Towne Centre. It didn’t translate well.

Traditionally, the island has been referred to in geographic terms. This tradition has accentuated our wholeness as an island and has served to unite us. We have the west and east ends, the south and north shores, Harbor Bay and Alameda Point. It works. 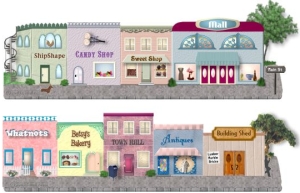 Alameda has TWO business “main” streets (Webster and Park) with TWO civic centers (city hall west and east).  Perhaps one area is more “historic” than the other, but both have rich histories. The city also has business and office parks at both ends of the island, with Alameda Point about to join the ranks.

While Park Street has held its own for years, Webster Street declined after the Naval Air Station closed. It has been beautified in recent years and is finally about to get its due.

I would have preferred that the Park Street district rename its association the “East Alameda” Business Association.

But regardless, let’s have a good old time in both our downtowns.