Right when we’re trying to attract commercial developers to Alameda Point, our next door neighbors are proposing to do the same thing a thousand yards away from Alameda’s eastern shore. 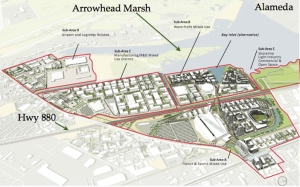 In an attempt to build a new stadium, the City of Oakland is in the process of adopting a Coliseum Area Specific Plan that envisions “reinventing” 800 acres along both sides of Interstate 880, from the Coliseum to Doolittle Drive near Martin Luther King, Jr., (MLK) Regional Shoreline Park. Oakland hopes the area becomes a major center for sports, entertainment, residential mixed use, as well as industrial and commercial uses.

On Sunday, December 7, the Sierra Club is hosting a “Development Discussion Hike” through part of the proposed mixed-use development area, adjacent to the regional park. Not only will you learn about Oakland’s plan, the three-mile easy hike will include discussion of the latest solutions to save shoreline communities facing inundation from sea level rise and the fate of species that depend upon tidal marshes, as well as new proposals to preserve the bay’s tidal marshes.

The Oakland project could potentially have significant impacts on Alameda and its plans for development at Alameda Point. It could attract businesses that might otherwise locate at the Point. 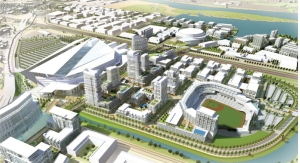 Overall, the proposed Coliseum Plan “will facilitate the creation of up to three new sports venues, up to 5,750 housing units, and almost 8 million square feet of net new commercial and business uses,” according to the Coliseum Area Specific Plan. “The Coliseum Plan Area is expected to have around 10,000 new residents and 21,000 new jobs by the time of project buildout in the year 2035.” 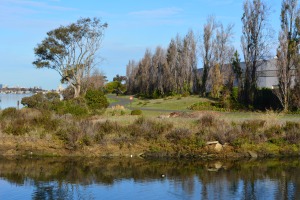 The Sierra Club hike will be a good introduction to this development plan for Alamedans. It’s also a good excuse to walk the great trails of the park and observe migrating birds along the way.

The hike will begin at 9:15 a.m. from the Arrowhead Marsh parking lot in MLK Regional Park. Leaving Alameda on Doolittle Drive, turn left onto Swan Way. Turn left again into the park and go to the end of the road.

The hike is on flat paved terrain and will last about three hours. Heavy rain cancels. 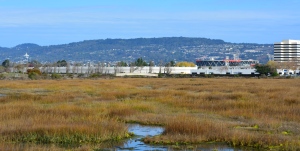