I couldn’t believe my eyes!  As I thumbed through Alameda County’s sample ballot and voter information pamphlet, I saw what resembled a campaign piece.  That’s right!  There in black and white, political party endorsements were listed. 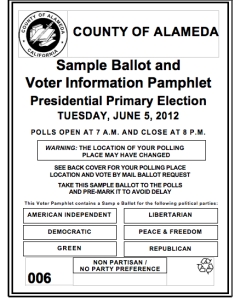 The county’s pamphlet, a quarter-inch thick, is filled with new pages because California now has an “open primary,” where voters can vote for a candidate for statewide office who is outside their party affiliation.  Only the top two vote-getters, regardless of party, will go on to the general election in November.

While there are clearly some advantages to this system, there are downsides as well.  Voters approved the open primary system, in part, to change the focus from political parties to the merit of individual candidates.  However, the state measure passed by voters included a provision permitting political party leaders to reinsert themselves into the process by allowing them to list their party’s endorsements.  These candidate endorsement lists used to appear in privately paid-for campaign slate mailers, but now they’re done at taxpayer expense in the voter pamphlet.

I wonder how many voters understood this caveat when they supported the open primary system.  Beside the fact that lesser known candidates have little, if any, chance of ever participating and having their views heard in the general election, this free campaign endorsement page in the voter pamphlet increases the chances for the highly funded and well-known political party favorites—mainly incumbents—to prevail. 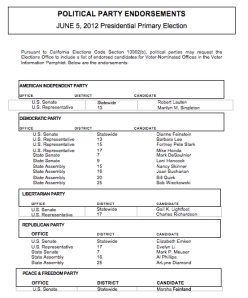 In an otherwise neutral pamphlet, where pros and cons and candidate statements are given equal weight and paid for by their author, state law now allows party leaders to plug their favorite candidates by name at taxpayer expense.  Fortunately in Alameda’s 18th Assembly District, where the race is highly contested, no party endorsement is listed.  Voters will have to do their homework and choose for themselves.

It’s bad enough that at the national level unknown donors can give unlimited campaign contributions.  But now at the state level the law allows party leaders to tell us who to vote for in a taxpayer-funded pamphlet.  This unfair advantage, financially and politically, marginalizes many candidates at a time when voters are deciding who they want to represent them in the general election.

I say, believe your eyes.  We now have a new way of lopsided campaigning, and it’s the law.

Like Loading...
This entry was posted in Elections and tagged Alameda, California, election, open primary. Bookmark the permalink.