Not long ago the city jumped through hoops to attract the Lawrence Berkeley National Lab to Alameda.  Now we have a new opportunity that is worthy of the same enthusiasm.  Only this time we’ve already been selected. 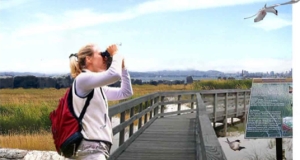 The East Bay Regional Park District wants to develop and manage Alameda Point parkland.  They are already poised to manage the wildlife refuge.  And next to the refuge, they want to develop the long-awaited Bay Trail and Alameda Point Park on the Northwest Territories, including creating a Veterans Memorial Park near a veterans’ facility.  This parkland could become the signature element that attracts future development to the Point.

Starting development at Alameda Point with a comprehensive, open-space design is exactly what Golden Gate University’s Center on Urban Environmental Law advocated last year.  They asserted, “It is one of the best strategies to maintain high urban property values and the economic health of a community.”  They added, “Extensive research has shown that open space/parkland can serve as the anchor and engine for economic development.”  I agree.  Beautiful, usable open space will add value and desirability to everything that follows.

Since base closure was announced 19 years ago, no feasible plan has emerged for creating parkland on the Northwest Territories until now.  After the city’s failed attempt to attract a developer to build a hotel, convention center and golf course there, the city opted to include the Northwest Territories in the SunCal development.  But SunCal eliminated Point Park from its plan and offered no conceptual alternatives for that area.

We now have the park district willing, ready, and able to turn this land into an urban parkland oasis for all to enjoy.  Starting with the $6.5 million in Measure WW funds for Alameda Point, they can begin to grade and landscape; construct trails, restrooms, lighting, picnic and observation areas, roadways, and parking; and find money for staffing expenses.  With their track record of finding two dollars in grant money for every one of their own dollars when everyone’s on board, they will be able to reach the estimated $20 million price tag for the project.

They are also equally equipped to secure additional funds for wetlands restoration and expansion.  Without the park district, this area will continue to remain fenced off because there is no one to manage it.

The park district’s proposal is a fabulous opportunity and should become a catalyst for the future development at Alameda Point.  No jumping through hoops this time around.

I say the city should move forward and give the park district a long-term, low-cost lease as soon as possible.  If that doesn’t happen, the Navy should consider conveying the land, including Enterprise Park near the USS Hornet, directly to the park district so they can begin developing parkland that all Alamedans and our neighbors can enjoy.