Right when you think every viable idea for developing Alameda Point has been put on the table … Surprise! … A new parkland/open space proposal is delivered by Golden Gate University’s Center on Urban Environmental Law.

What makes the proposal unique?  It advocates securing and designating green space as the first land-use priority before any building construction is decided upon.  The proposal calls for one contiguous open-space corridor along the entire waterfront at Alameda Point, with certain areas designated for wetlands and natural habitat.  Considered the defining centerpiece for Alameda Point, around which all other development will revolve, the directors of the project see the value of a comprehensive, versus piecemeal, open-space design.

Using a well-developed body of urban planning literature, Professors Paul Kibel and Stephanie Landregan are in the process of showing the city how “the creation of large-acreage landmark naturalist parks is one of the best strategies to maintain high urban property values and the economic health of a community.”  They add that “Extensive research has shown that open space/parkland can serve as the anchor and engine for economic development.”  According to Landregan, “There are already a series of mediocre developments along the Alameda-Oakland Estuary (with structures pressed right up to the waterfront instead of set back to allow the beautiful natural surroundings to take center stage) that have stumbled financially despite excellent public transit access.  Why attempt another one at Alameda Point when the site promises so much more?” 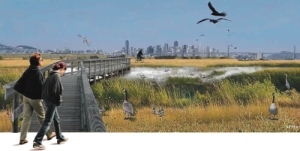 The professors assert that the Alameda Point planning process should begin by capitalizing on one of the few remaining open-space opportunities in the East Bay offering spectacular unimpaired views of the San Francisco skyline.  They believe going bigger is better because it may make it easier to enlist regional and federal support. The East Bay Regional Park District has already expressed interest in managing large acreage space at Alameda Point, and funds for wetlands restoration are available.  And a more naturally sustained landscape reduces long-term maintenance costs. 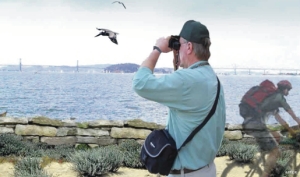 If the city embraces the project’s design concepts and takes the lead in planning, advocating and establishing scenic, recreational and open space, it is more likely that the nearby federally owned property, where the proposed Wildlife Refuge and the Veterans’ Clinic are poised to sit, will be developed in a similar manner.

The park frontage corridor would ensure that all concrete and structures are set back from the shoreline (except for the existing docks), guaranteeing public access to prime views of the Bay, reestablishing the Bay/marshland transition in some areas, and creating a buffer zone for incremental sea level rise.

A wide range of stakeholders will find value in this land-use plan, which incorporates input from city-sponsored workshops.  From those who support naturalist land uses and public waterfront access to those who want a thriving mixed-use area, the Greenspace Project, dubbed “Flight Park,” promises a strong return on our investment.

Golden Gate University’s proposal comes as the city is refining its park master plan, defining sustainability issues related to the development of Alameda Point, and responding to the Bay Conservation and Development Commission’s call for climate-change preparedness at the Bay Area’s waterfronts.

The plan is worth considering.  It is important that the city incorporate this proposal during its upcoming hearings about the future of Alameda Point.

1 Response to Greenspace Becomes Us