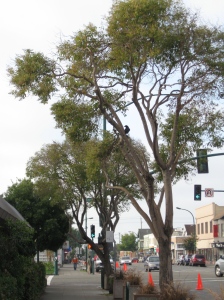 The loss on Park Street of 28 mature trees in one fell swoop on October 19 and 20 (and three more trees days later) is not only heart-wrenching, it shows how official city policy doesn’t always guide official city action.

The trees were not diseased nor were their roots damaging the sidewalks, creating tripping hazards, except where concrete was poured right up to the trunks of two trees.

The 31 trees were removed in the name of “progress”—a continuation of the 2002 Park Street Streetscape and Town Center Project—to make way for the installation of vintage lighting and parking meter kiosks.

As part of its consent calendar, the city council approved the tree removal without discussion in March 2011, and an October 4 press release announcing the resumption of work on the streetscape project did not mention tree removal.  City leaders have since apologized for the lack of notice and for not holding a new public meeting “to remind the community of this project and confirm its support.”

Something else in the process also went wrong.  Between the completion of phase one of the streetscape project (Webb to Central) in 2005 and the recent start of phase two (Central to San Jose and Lincoln to Webb), a citywide tree policy was adopted.  It should have triggered the revisiting of the 2002 streetscape plan.  Instead, city officials moved forward with a plan that contradicted the new tree policy—a policy the community had spent valuable resources putting together.  Likewise, the new tree policy failed to specifically address the pending Park Street project and made only a generic design recommendation for “removing trees that are in decline and planting new ones.”  It’s no wonder the public was not expecting every tree in the project area of Park Street to be removed.

An overall goal of our citywide tree policy is to “Discourage the unnecessary removal of existing healthy trees in the design, construction, or reconstruction of street projects.”  The tree policy states explicitly that “tree removal is a last resort alternative … after all practical and reasonable alternatives have been considered.”  Could we have worked around and saved many of the existing trees on Park Street?

The tree policy warns that “when construction occurs in the name of progress, trees are often compromised in the process.  Attempts to save trees during the construction process are often doomed unless protective measures are carefully implemented prior to … construction.”

The city may well be working to make sure protective measures are in place for future redevelopment or construction projects, but unfortunately the Park Street streetscape project was not flagged for closer scrutiny in the tree policy.

Memories will fade, new trees will be planted, and we will move on, hopefully, to a future in which previously approved plans are updated to match current policy and new policies address existing plans.  For now, we mourn the loss of these 31 trees.

See related posts:  In Memoriam: Tree Grande and Chop Park Street.  Read my commentary, unrelated to trees, about when the city ignored the 2002 Park Street Streetscape and Town Center Project.

Like Loading...
This entry was posted in Quality of Life and tagged Alameda, Park Street, Trees. Bookmark the permalink.